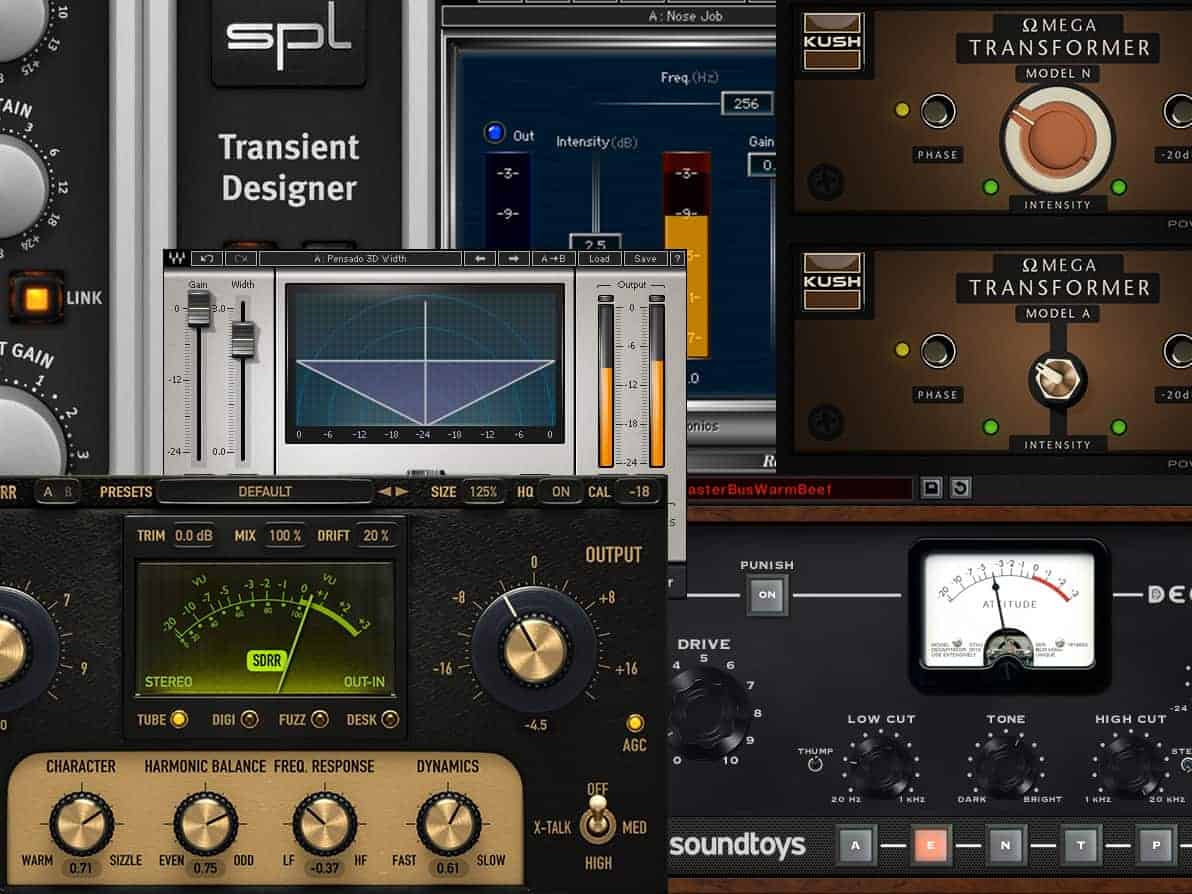 If I could only have one effect or plugin, it would be a good saturator. You can use saturation to do just about everything from compressing to distorting to just adding color or harmonics to enhance the overall tone.

One of the major problems with digital recording is everything is captured so “cleanly.” Because digital signal processors lack actual hardware components, the super fast transients are preserved in an almost unnatural way. Super clean digital recordings tend to sound “sterile” compared to those recorded to an excellent magnetic tape machine. The analog components inevitably soften transients and add what most engineers describe as warmth and color. Whatever word you want to use to describe it, the end result usually makes things sound better and, more importantly, blend easier.

To compensate for these super clean recordings, many software companies that are emulating classic analog gear have added saturation stages into the algorithms. It is common to see a saturation stage in compressors, equalizers, and even some delay units such as the Waves H-Delay and Soundtoys Echoboy. The reason for this is that the units they are modeling had transformers, transistors, capacitors, and other components that the audio would have to pass through before being outputted to your speakers. In order to accurately model these classic processors, programmers needed to make sure the coloration that is happening inside the unit is there as well.

A few favorite saturation plugins of mine are the Kush Omega series, Soundtoys Decapitator and URS Saturation.

It’s common to hear other audio engineers talking about “width” or “how wide a mix” is. There’s a reason for it. Something that sounds wider usually sounds “better” because it sounds fuller. There may be a select few scenarios where a narrow mix might be preferable, but for the majority of music, you’ll want to actively try to keep the stereo field as wide as possible.

Midside takes a stereo signal and decodes it into a mid, and a side channel rather than the standard left and right. This lets you control the mid and the side channels separately.

The mid channel lets you control the center of the stereo image. If the mid-channel is boosted, the listener will perceive the source as narrower or more mono.

The side channel is the outer edge of the stereo field. Boosting the side channel will give the listener the perception of a wider sound. M/S decoding stems from the microphone technique of the same name invented by Alan Blumlein in 1934.

Mid/Side can be a very powerful tool, but a little definitely goes a long way, and you need to be careful of going too far as more extreme settings can cause phase and imbalance issues.

Automating Mid/Side effects is a fun way to add width to synths or guitars during a particular section of a song. Another cool trick is to raise the mid-channel on the overheads to get more focus and punch out of the kick and snare.

My favorite M/S plugin for decoding is Brainworx BX Control. I like the Waves Scheps 73 for M/S eqing.

In the past, I wish I had been more aware of the stereo field and just how important it is. A good mix engineer is very aware of giving every element of a production its own deliberate space. No two elements can be competing, and everything has to be put in a place that makes sense. That’s what makes a good mix. Many people underestimate how important and powerful panning is as a tool for engineers. There are many problems that can be solved with just a small move of the pan knob. Instead of trying to cut a conflicting frequency with an equalizer, adjusting the panning can often be a better solution.

The center of a stereo image is where the important stuff is going to happen. The vocals are arguably the most important, and you’ll always find them located smack dab in the center. You’ll also need to make sure both channels are balanced. This can sometimes be difficult during the mixing phase as there are times when you’ll want a mono sound playing through both speakers that is conflicting too much with more important elements. A widener is a perfect tool for getting an element out of the way of the center while still keeping the stereo image balanced. I hate pulling a guitar or keyboard over to one side without another sound on the other side to balance (unless I’m specifically going for that effect or want something to really stick out). There are multiple ways widening plugins make the image seem wider, and most involve some phase manipulation.

My favorite wideners are the stock Stereo Spread in Logic Pro X and also the Waves S1 Stereo Imager.

I learned that It’s hard to know you need something when you’ve never tried it. No, I’m not talking about drugs (stay away from those kids)! I’m talking about transient designers. I waited a little too long before I decided to try out a transient designer. It’s a tool that serves an important purpose when it comes to newer, more transient heavy electronic music, and it can not be replaced by any other tool in an audio engineer’s toolbox.

I think the reason I went so long without using them is if there was ever a sample or some track that would benefit from adjusting the transient, instead of opening up a  transient designer, I would opt to replace the sample or find another way to fix whatever issue I was having. That’s the beautiful part about recording and art in general. There’s always more than one way to do something, and if it works, it works, and it doesn’t matter whether anyone else considers it “right.”

Replacing the sample is one way to fix a problem but using a transient designer is a much quicker and more efficient way if you are looking to adjust the attack or sustain of a particular sound.

My favorites are SPL Transient Designer and Waves Smack Attack.

These synthesize harmonics and allow you to blend them into a dry source. Harmonic generators like the Aphex Aural Exciter have been a long-standing staple of recording studios and are commonly used on vocals to help add extra shine. These units ultimately help the sound pop, they add excitement which you mostly notice in the high frequencies.

Subharmonic generators like the Peavey Kosmos and Waves R-Bass allow engineers to add synthesized subharmonics into their bass, kick, and synthesizer tracks. Subfrequencies that are 40 Hz below are difficult to capture via a standard microphone. You may have seen engineers recording a kick drum with a sub mic. A subharmonic generator allows you to synthetically add in these frequencies to help give the tracks some extra low-end oomph.

My favorites are Waves R-Bass and Vitamin.

Maybe you’ve bitcrushed a synth track, but have you ever tried bitcrushing a hi-hat? or shaker? Or a vocal double and blending it back in for a lo-fi texture. When you lower the bit depth of an audio signal, you alter the frequency response. The lower the bit depth, the lower the frequency range the audio signal can reproduce. Lowering percussion tracks or other sounds to 16 bit, 8 bit, or even lower can help add some texture that no other processor can.

You’ll find bit crushers are great for adding harsh distortion. They are a go to for engineers that want to absolutely destroy a sound, but they also can add more subtle color effects when used more tamely.

Related articles:
5 mixing mistakes that I used to make… and how to avoid them
How to calibrate your studio monitors
Things I wish I learned sooner about audio engineering
The “your mixes sound bad in the car” phenomenon