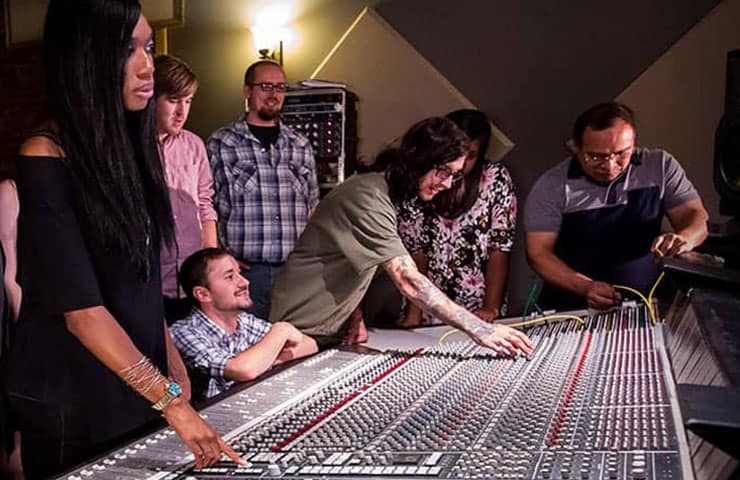 I hate the word “networking.” Having a lot of friends, being popular, having a good reputation, whatever you want to call it, it’s important and can make someone’s career. Going back to my previous post, “[Even more] Things I wish I knew sooner about audio engineering,” I used to be negative toward anyone or anything that I saw as competitive. The truth is I was just insecure about my skills and talents, and I felt putting other people down would make me better or at least feel better. Well, it turns out that didn’t work at all, and a better approach would have been to be friendly and kind to everyone.

I went to school with a talented producer. No one I was friends with others, but my school was so small it was hard not to know everyone. This guy ends up getting a publishing deal, moving to LA, writing for Rihanna, and then signing a record deal and bringing all his friends from college on tour with him as his band. This is only one scenario but being friends with someone was the catalyst of their career. One credit isn’t going to make you, but it can be a launching pad and set off a chain reaction. Get out there and make some friends.

Now, saying this and doing this are two different things. I’m sure a lot of you probably have heard someone say, “you need to network,” at least a few times. But what do they actually mean? How do I “network”? Just be friendly, approach people you wouldn’t usually approach, go out when you feel like staying in, and help people out if you have access to something they don’t. Print up business cards to hand out to people you meet and ask for theirs. Follow up on social media and keep the relationship going. These small things don’t seem like a lot, but if you keep doing it, eventually, they start to add up.

Be humble, don’t ask questions at the wrong times, be proactive. These are all things that will make you a good intern. It’s incredible how many bad, socially inept interns there are.

Bad intern stories? I’ve heard of everything from an intern asking to work with a client because he’s dropping a new mixtape to one trying to steal clients away from the studio. Don’t be an asshole, realize that people opening their doors to you are doing you the favor and not the other way around. Trust me, when you first start interning at a studio, you’re way more of a burden than an asset. They don’t need you to be there. Make yourself useful and ensure they don’t think you’re taking up more space than you’re worth.

Having the best gear or the best room isn’t enough. People have to want to work with you. Your work should speak for itself, but your relationships with people are what’s going to be the deciding factor on if people want to spend their money and time making art with you. This goes back to networking. The more people you know, the more chances you have of finding clients.

I can’t blame audio schools for this one, as this is another life skill that’s difficult to teach. It deals with how good you are with people… Are you easy to talk to? Do you seem enthusiastic? Are you fun? These skills are beneficial in all aspects of life. Someone that’s fun to be around and people generally find nice is going to get further no matter what industry they’re in. Some people are innately good at these things, and there are others who aren’t. These things are difficult to teach, but that doesn’t mean you can’t work on them. Try to be self aware of your interactions and work on things you aren’t good at. I never liked the small talk, but I realize now it’s an essential part of social interactions, so I make an effort to do it even if I’d naturally prefer not to.

What guitar should you use? Does that section in the chorus work? Is that singer out of tune? Does that drum fill sound good?

There isn’t a class called “Good Taste 101.” Most people have a terrible taste (these are the people you’ll be working with, by the way). You can learn some of these things with experience, but for the most part, your taste and what you prefer as an individual are uniquely your own.