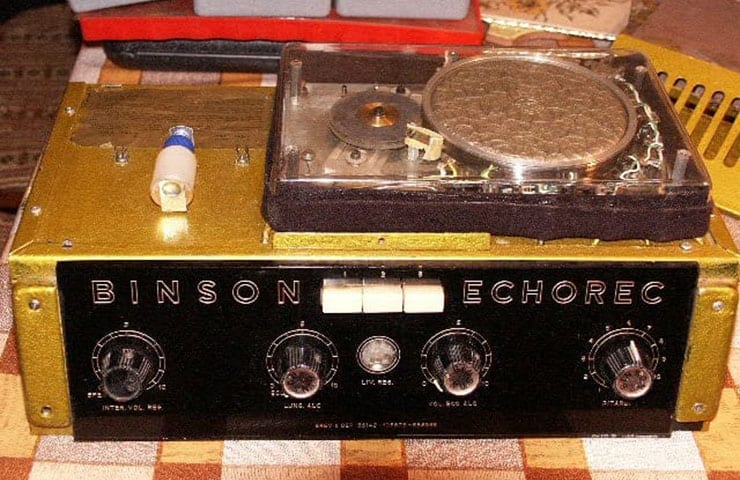 The Binson Echorec is one of those magical, mystical, undeniably beautiful sounding devices. It’s the kind of gear that makes you appreciate its existence– that some genius was able to design something so incredibly inspiring. It almost hurts me to write this now, knowing that I don’t have one of my own. It’s the holy grail of all guitar and delay effects units, and it’s not just hype. Praised for years by guitarists all over the world and made famous by legends like David Gilmore and Jimmy Page, the Echorec was the brainchild of Dr. Bonfiglio Bini.  Dr. Bini was an Italian engineer and the founder of the Binson HiFi Company. For Dr. Bini, quality was of utmost importance. Every single component, for every single unit, was made in house. When asked if it would be cheaper to use a third party for cases,  Dr. Bini replied, “sure, it would have been cheaper, but then it would not be Binson stuff anymore.”

The Effectrode pedal company has more in-depth articles about the Echorec, but I’ve decided to summarize some of the information I’ve found there and other sources to help tell the story of a truly marvelous piece of gear.

Dr. Bini began manufacturing radios in 1940 from his first factory in Milan, Italy. He later moved on to television sets before making guitar amplifiers, which led to his major seller: The Binson 3°. Over the years, Binson made many different items, from mixers to reverbs, to microphones and PA speakers. They even made an organ called the Binsonett (although it’s hard to find much information on them besides a few pictures). Most of these products are difficult to find today, especially if you live in the United States. Without a doubt, they are most famous for their Echorec delay units. During a time when studio effects were limited to tape delays, plate, and room reverb, Echorecs used a new technology developed by the founder, Dr. Bini, and the principal engineer, Mr. Scarano Gaetano. The two undertook a massive research effort to find a better medium for storing delay signals than magnetic tape. The result was the Echorec delay unit and their memory disc technology.

Echorec utilized memory disc technology, which used a drum recorder instead of a tape loop; this allowed for a better overall frequency response and did not leave the negative artifacts of tape, such as wow and flutter. The drum was meticulously wound with a steel wire and then milled flat. A motor drove the drum, and the heads were placed in different spaces around it. Dr. Bini spent a lot of time figuring out the best position for each head. Each was chosen so that the delay times were extremely musical.

The unique memory disc technology was the main contributing factor to the lush delays these units were capable of. Still, you can also attribute some of that to the preamp and internal electronics. These units were so well-made that just running it through the preamp without the delay engaged would enhance the tone of the guitar.

Echorecs were extremely expensive, some costing as much as a Fender Strat and more than an AC30. Think about that… You could either buy a new Fender Stratocaster or a Baby Binson, that’s how expensive these units were.

Check out this great video of the guys from That Pedal Show demoing a real Echorec vs. a few different modern clones,

Although Dr. Bini stopped production in 1986, he still stuck around the factory and, in his free time would give tours. I can only assume this was truly a labor of love for the man, offering tours, even after retirement, shows that he genuinely enjoyed his work, his factory, and his legacy. His reputation confirms that. He would even sell off the leftover stock of the Echorecs– amplifiers and mixers that remained.

David Gilmour is the most famous user of the Echorec, and it was arguably the thing that defined his sound the most. Syd Barrett, the original singer of Pink Floyd, was the first to use an Echorec. The story (as told by Gilmourish.com) goes, Syd went to watch an experimental electronic band named AMM and saw them using one. Enamored by the syncopated delay patterns and almost mystical warm sound, he began to use one himself. When Gilmour joined the band, he took Syd’s set up and expanded on the use of the device. The most famous song you can hear utilizing the Echorec is Pink Floyd’s “Time.” Gilmour toured with multiple Echorecs for years, but they were delicate and not the most practical for the rough life on the road. Each unit requires frequent maintenance, and many included a unique holder right on the case for lubricant.

So I’m sure you might be wondering… how do I get an Echorec? How expensive are they now? Are they still difficult to maintain? Are there any modern pedals that can emulate an Echorec?

Well, yes, Echorecs are still expensive and even more difficult to maintain due to the ever-dwindling supply of parts and the expertise needed to repair them.

Value for Echorecs has a wide range and there were many different models for which the price varied drastically. The Echorec 2° is the most popular model and yields the highest demand and cost, which usually averages around $3,000.

Echorecs are definitely for the most dedicated collector who will stop at nothing to achieve the ultimate guitar tone and doesn’t mind spending time and money along the way. Frankly, I can’t blame them as that’s a pursuit that I’m sure most of us can agree is worthwhile.

If you don’t have $3000 to spend, you’re in luck. Auditory has a plugin version that sounds really good. It only cost $£49 and is worth every penny.