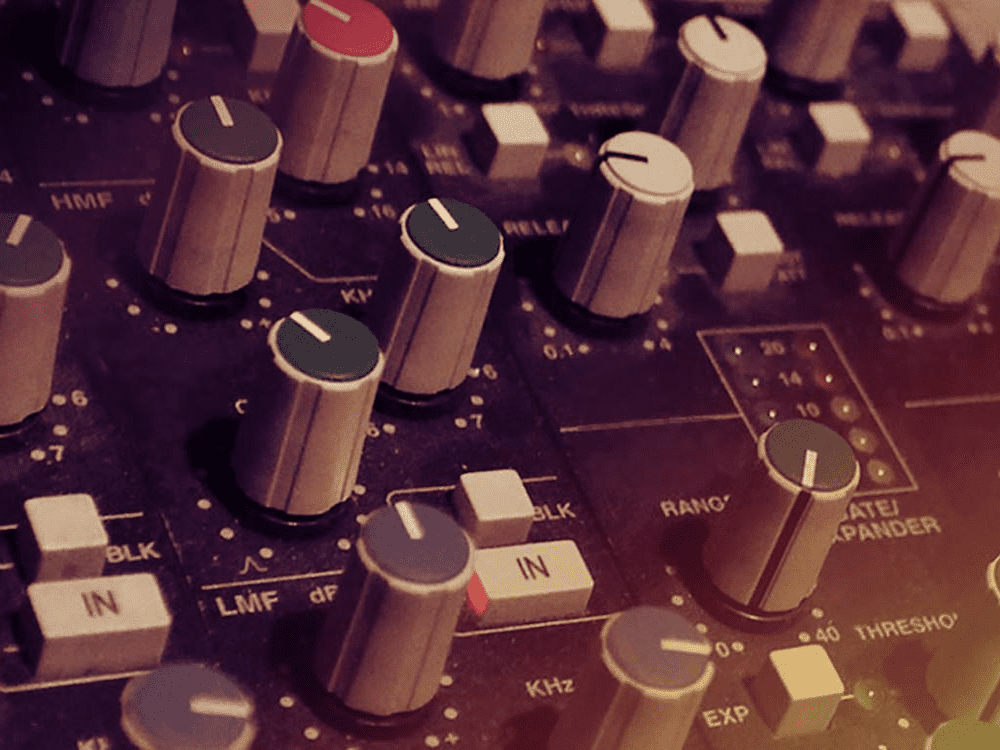 Classic recording consoles are extremely sought after for their hands-on workflow and larger than life sound quality. There’s nothing like riding the volume of a vocal, having your fingers on a real fader while being able to easily reach an immaculate sounding equalizer and compressor on every channel. With all good comes some bad, and using a console has its fair share of cons. For starters, they are huge. It requires a lot of space, energy, and patience to run and maintain such an enormous piece of gear properly.  Still, the ability to touch a console with your fingers and express your sonic desires physically, moving faders, twisting knobs, and pushing buttons, cannot be emulated with a computer or touch screen.

Everything started with analog gear and recording consoles, and today’s DAWs take direct influence from the past. Large format consoles have thousands of switches, transistors, capacitors, relays, and other components that make the elaborate device work. These large intricate, and complicated tools are true marvels of electrical engineering. Today it’s easy to take for granted just how remarkable consoles are. Techniques previously only accomplished with a console, tape machine, and meticulous editing are now easily done within a computer.

I’m not here to debate if analog or digital is better, I’ll leave that to Gearslutz and Facebook groups (spoiler alert: it doesn’t matter, and you should use whatever works for you), but I am here to honor the great recording consoles that paved the way for modern recording techniques. I made a list of some classic consoles that have been heard on countless hit records (and even more that weren’t hits) and decided to write about their history and what makes them unique. Some people like to experience the nostalgia of classic cars, clothing, toys, or art; well, I like consoles and audio gear.

Solid State Logic, better known as SSL, was founded in 1969 by Colin Sanders. The company’s first products were switching systems for pipe organs that used FET switches to communicate between the keyboard and the electromechanics of the pipes. These switches replaced older unreliable relays, solenoids, and thick interconnecting cables.

Colin began designing and making consoles for his studio in his home village of Stonesfield, Oxfordshire, England. The first console he made was called the “A” series, and it was continually improved upon until he decided to build six to sell to other studios and institutions. These became the 4000 B series, and he eventually sold them to studios around the world, including Townhouse Studios in London, where it was used to record the famous drum fill (and the rest of the song) for Phil Collins’ In The Air Tonight. The B Series was the first desk to integrate a studio computer system with a console.

They continued to revise the 4000 series and, in 1979, changed the game with the breakthrough 4000 E series, which was unlike anything the industry had seen before. It was the first console to have a dedicated dynamics section, which added a compressor/gate/expander on every channel. It also included the company’s famous fully parametric equalizer, which allowed engineers to boost and cut frequencies with incredible detail and accuracy. These two things, coupled with the console’s flexible routing, were the catalyst for what I consider a renaissance in the art of mixing during the ’80s. These feature-packed consoles allowed engineers to explore new creative techniques to hone in on more modern, polished sounding productions. Gated toms, reverbs, scooped mids, a ton of compression, and layering were all new techniques that were only possible because of the SSL console’s new features. This flexibility gave access to a whole new palette of colors for engineers to paint with and changed the way music would be heard forever.

In 1987, the company introduced the 4000 G Series console, which had a slightly different EQ section. The G Series equalizer used steeper filter slopes and incorporated a variable proportional-Q design, which automatically adjusts the Q value as you boost or cut.

In this video, Tony compares the Waves version of the two types and describes the G to be more midrange forward and better for rock and roll and the E to be rounder sounding and better for Pop, R&B, and Hip Hop.

Over the years, the company has gone through multiple owners and now resides as part of the Audiotonix Group along with Digico, Calrec, Allen & Heath, and Digigrid brands. They continue to make consoles, although they have put more effort into live and smaller hybrid analog/digital consoles.

Very few people have had as great of an impact on music technology as Rupert Neve. Every single recording studio has some form of Neve clone, plugin, or original preamp or compressor. The name alone has become synonymous with high quality, extremely musical sounding pieces of recording gear. Their consoles have something unique about them. Whatever the magic is, there’s no arguing that Rupert Neve had an incredible ear and genius for designing audio gear. Preamps, equalizers, and compressors designed by him have lasted the test of time and are still extremely sought after.

Rupert Neve learned how to build and sell radios from a very early age. During WWII, while serving with the Royal Signals, he was able to hone his skills in building radios and pa systems further. He went on to build a mobile recording studio in a US Army Dodge ambulance where he was able to record hours of opera concerts, music festivals, and public events directly to 78 RPM lacquer discs.

After working for a few small radio and transformer manufacturers, he started making bookshelf loudspeakers and selling them. In the mid-1950s, he was commissioned to build a console for Desmond Leslie, a professional composer of Musique Concrete. This new experimental style of music required the use of multiple tape recorders that were playing loops with different pre-recorded sound effects. Leslie needed a way to mix his tape machines, thus giving a reason to commission the first-ever Neve console.

In the 1970’s Sir Rupert Neve entered his golden years when he was designing and producing some of his finest consoles. The 80’s series consoles are what most consider when referencing a vintage Neve console. There were many iterations of 80 series consoles through the 1970s and 1980s; each console was custom made to order, specifically for their buyer.

The majority of the 80 series consoles included entirely class A mic preamps; the 8028 included the famous 1073b, while the 8058 and 8068 included 31102 mic/pre EQ modules, which are very similar to the 1073 with a few design differences and some additional hi-frequency EQ points.  Many of these consoles included the very sought after 32264a compressor/limiter. Like all Neve compressors, these use a diode bridge circuit based design, which outputs a very desirable thick, warm, smacking tone.

The 8058 and 8068 are almost the same except for an additional four channels on the latter. Another key feature that sets these desks apart from earlier consoles the company made is the eight aux sends, allowing for more flexible routing. These consoles were staples of some of the best studios in the 70s and 80s.

1978 saw the first 8078, which was their first large format console and featured up to 72 channels. The 8078 is the last hand-wired analog console to be produced in the 80’s Series. These consoles usually come loaded with varying numbers of 31105 microphone/line preamp and EQ modules.

If you want that Neve sound and don’t have $5,000 to shell out for a single channel of the original, you can buy one of the bazillion clones that vary drastically in price and quality. If the price is not an issue, the BAE 1073’s are some of the best around. If you’re on a little bit of a smaller budget, check out the Vintech X73i. And if you’re on an even smaller budget and have a Universal Audio interface, check out the UAD unison plugin version.

The Record Engineering Development Department (REDD) was established in 1955 by Abbey Road Studios’ technical engineer Lenn Page. Within a year, they had produced the REDD.1 console, which was their first dedicated stereo mixing system. At the time, EMI/Abbey Road made just about everything in house. Mass-produced consoles didn’t exist yet, so everything was designed and built for their specific needs.

The REDD.17 console was developed in 1958 and was one of the first modern-style consoles. Interestingly, this was also around the same time that Tom Dowd was in America at Atlantic Records, wiring up his first modern style recording desk. It’s up for debate as to which one came first, but the consensus is they both created these desks around the same time independently. Therefore, both should be credited.

The REDD.17 was designed by Peter Burkotwitz, who was based in EMI Electrola in Germany. This console was created in sections and pioneered modular designed systems that just about all large format consoles use today. The entire console could be broken down and shipped in five individual pieces.

The REDD 37 was the second version of the console, and only two were ever made. This new model added outputs needed to accommodate the studio’s new four-track tape machines. There were 8 inputs, 4 outputs, and treble and bass EQ adjustments on each channel.

All REDD consoles are vacuum tube-based, and the 17 and 37 models used Siemens V72S preamps. The V72S is a tube preamp with a fixed gain level of 40 dB. Suppose you need less gain, then you’ll have to move the microphone or use an attenuator. The REDD 37 is commonly known as the Beatles board; however, it was only used until 1964 and then again on their Let It Be album (when Magic Alex conned the band into commissioning him to build a console that was never completed).

EMI originally wanted eight of these desks built, but only three were actually completed. One console wound up as a prototype and found a home at Kingsway Hall, another EMI recording facility. The other two were slightly upgraded models of the prototype and became actual production models. They both landed at Abbey Road in Studio One and Two.

In January of 1964, EMI replaced the REDD.37 console in Studio Two with the brand new REDD.51. The main difference between the 51 and previous models is the amps used; instead of using the V72s like the 17 and 37, this console used REDD 47 amps. These new amps were built in house and offered lower distortion and more headroom than the V72s. Only four REDD.51 desks were made, and they were eventually phased out in the late ’60s for the transistor-based TG series. Today there is only one known REDD.51 in existence, and it is located at British Grove Studios in London.

Both the 37 and 51 featured 14 quadrant faders (and yes, those are the ones that look like spaceship levers). The levers controlled the eight mic channels, two aux channels, and the four central faders controlled the master outputs to the 4-track tape machine.

Also found on the console are dedicated echo sends and returns, different styles of pan pots, and a unique spreader control, which allows for adjustment of the stereo image.

If you’re looking for that vintage REDD sound, you’re in luck. Chandler Limited has cloned the preamps very well. A-Designs also makes the super fat sounding REDDI tube DI box, and Kush has a great plugin version of it.

Related articles:
5 of the rarest and most unique synths ever made
5 mixing mistakes that I used to make… and how to avoid them[Even more]
Things I wish I learned sooner about audio engineering
The “your mixes sound bad in the car” phenomenon