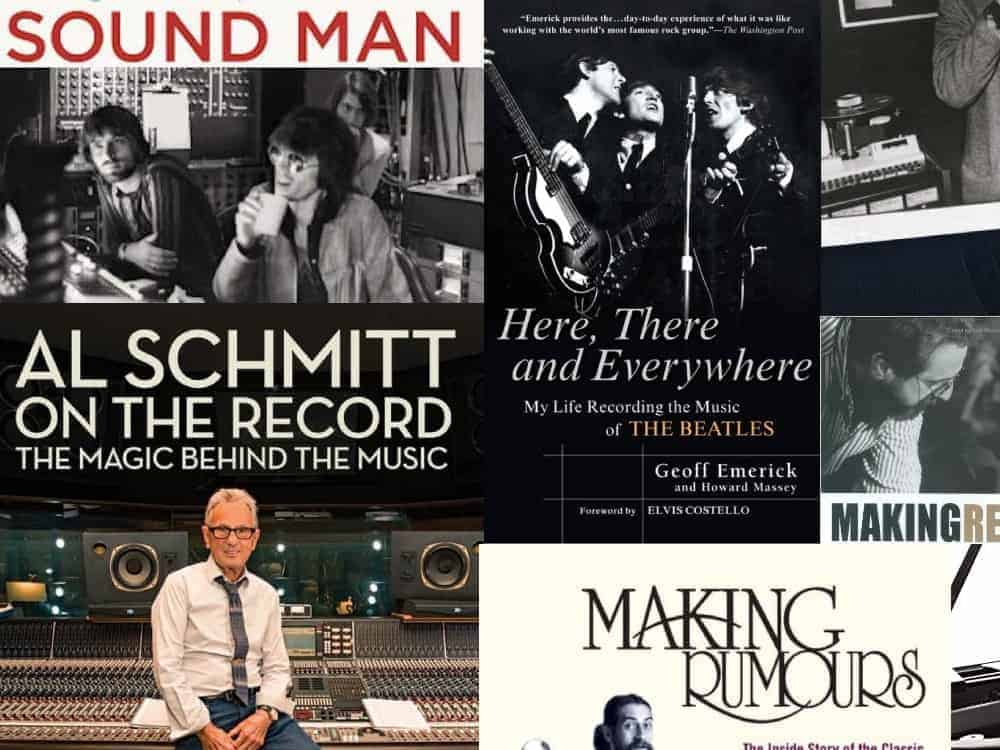 Here, There and Everywhere: My Life Recording the Music of the Beatles by Geoff Emerick

Whether or not you’re a fan of the Beatles, if you’re into audio or music production, you need to appreciate the groundbreaking recording and production techniques used at Abbey Road. Geoff Emerick is the audio engineer who was behind the console while the Beatles were recording many of their most famous tracks. His memoir gives a first-hand account of what it was like to work with the four mop tops in the heyday of their popularity. His life story is fascinating, having begun working at EMI studios when he was just 15. By 19, he was tasked with recording the biggest band in the world, eventually becoming one of the most influential audio engineers of all time.

Abbey Road to Ziggy Stardust: Off the Record with The Beatles, Bowie, Elton & So Much More, Hardcover Book by Ken Scott with Bobby Owsinski

Ken Scott was another one of five people that had the privilege of standing behind the desk for the Beatles. He also was responsible for engineering David Bowie’s famous Ziggy Stardust and has worked with artists like Pink Floyd, Jeff Beck, Elton John, Supertramp, The Rolling Stones, Harry Nilson, Kansas, Lou Reed, America, and many more. Like Emerick, Scott rose to prominence as a staff engineer at Abbey Road. He was displeased with Emerick’s portrayal of The Beatles and their producer George Martin which led to him refuting some of his stories in this book.

Sound Man: A Life Recording Hits with The Rolling Stones, The Who, Led Zeppelin, the Eagles, Eric Clapton, the Faces. . . by Glyn Johns

Glyn Johns was one of if not the most sought after audio engineers in London during the 1960s. Johns specialized in working with the original artists and finding a sonic character that complemented their music. He was also a pioneer in creating new techniques and, most notably, for his drum mic technique, which many engineers still use today. This book is as close as it gets to being a fly on the wall in some of the most famous and monumental recording sessions there ever were.

Phil Brown might not be as well known as some of the others on this list. Still, his story is not any less impressive. Brown started his career as a junior technician in 1967 and learned by working under such audio geniuses as Glyn Johns and Eddie Kramer. Eventually, he was recording some of the most prominent artists, such as Mott the Hoople, Bob Marley, David Bowie, Talk Talk, Steve Winwood, Dido, and Robert Plant. The book covers much of Brown’s time spent in the studio, including techniques and gear that he used. The reader is also given an intimate look into an audio engineer’s life during this time period. Brown talks very candidly about his struggles with balancing his home life, drug abuse, and dealing with the industry’s challenging social and political aspects.

Al Schmitt on the Record: The Magic Behind the Music by Al Schmitt

Al Schmitt is a living legend in every sense of the word. A true master of the craft that is respected by every single person in the industry.  His incredible story begins in New York City as a young kid visiting and eventually working at his Uncle Harry’s studio. He went on to apprentice under the godfather of audio engineering, Tom Dowd. His first real session was with Bing Crosby when he serendipitously was the only engineer available to run the session. You can only imagine everything else this man has seen and been a part of– He has worked with Frank Sinatra, Ray Charles, Sam Cooke, Bob Dylan, Elvis Presley, Madonna, and Paul McCartney, to name a few. Schmitt has engineered over 150 albums and has over 20 Grammy awards, more than any other engineer or producer. He was also the first person to win both the Grammy and Latin Grammy for Album of the Year.

Making Records: The Scenes Behind the Music By Phil Ramone with Charles L. Granata

Phil Ramone has worked with everyone. Ray Charles, John Coltrane, Bob Dylan, Elton John, Billy Joel, Paull McCartney, Frank Sinatra, Paul Simon, and Stevie Wonder. He established one of the earliest independent recording studios, A & R Recording, with Chief Engineer Bill Schwartau in 1959. He was sought after for his impeccable sounding records and innovative use of technology. Ramone has been nominated for 34 Grammys and won 14 of those, including a Technical Grammy for a lifetime of innovative contributions to the recording industry, Best Engineered Recording. He’s produced the Album of the Year, the Record of the Year, and in 1981 won Producer of the Year. In his later years, he transitioned into an executive role for The Recording Academy.

Making Rumours: The Inside Story of the Classic Fleetwood Mac Album by Ken Caillat with Steven Stiefel

Ken Calliet was the man behind the glass and turning the knobs when recording some of the most significant songs ever produced. Fleetwood Mac’s Rumors sold over 45 million copies and went 20 times platinum. Making Rumours gives you an insider look at what it was like to work in Los Angeles with the Mac in 1976. On top of the musical significance, there was no shortage of drama, as sex and drugs were aplenty. There was also some drama stemming from multiple romantic relationships between band members ending shortly before the recording of the album started. Calliet tells his side of the story and gets into the more technical information about the recording and mixing process. If you’re a fan of this album (and you’d be crazy not to be), you’ll enjoy the read.

Learn about how a young kid from Brooklyn moved to the UK and became a pivotal part of launching an entire genre known as Glam Rock. Visconti was one of the most influential music producers of the 1970s. Most famously known as the producer behind David Bowie’s records, he has also worked with other famous artists such as T. Rex, Moody Blues, Joe Cocker, Thin Lizzy, Morrisey, Paul McCartney and Wings, and many more. Visconti’s nonjudgemental, honest and straightforward storytelling makes this one of the most readable memoirs on this list.

The Latin Hit Maker: My Journey from Cuban Refugee to World-Renowned Record Producer and Songwriter by Rudy Pérez

If you’re not familiar with Rudy Perez’s name, you’ve, without a doubt, heard some of his music. Perz has produced over 70 albums and written over 1000 songs, of which over 300 have reached the top 10 charts. He has worked with world renowned Latin artists such as Julio Iglesias, Marc Anthony, and Luis Fonsi and mainstream artists such as Christina Aguilera, Michael Bolton, Beyonce, Jennifer Lopez, and many more. His music accolades aside, he has a fascinating and true rags to riches story. He was born in Cuba and fled the country to escape the political regime. His family eventually made it to Miami, where they were forced to live in a refugee camp before they were able to settle in Florida. He quit school at 15 and worked his way up to working with some of the most prominent artists of all time. This is one that you’re guaranteed to enjoy, and it will be difficult to put down.

Ted Templeman, who is most famously known for working with Van Halen, The Doobie Brothers, and Aerosmith, was a hitmaker for Warner Brothers in the late 1970s and 1980s. Templeman generated worldwide sales approaching 100 million albums. Templeman’s story has an appropriate amount of sex, drugs, and of course, rock and roll; he’s also able to sprinkle in plenty of the technical information of the recording process.


Related articles:
Cultivating new habits and why you shouldn’t wait for motivation
The most embarrassing audio mistake I’ve ever made
5 mixing mistakes that I used to make… and how to avoid them
The “your mixes sound bad in the car” phenomenon