The Carbonphone is undeniably cool. 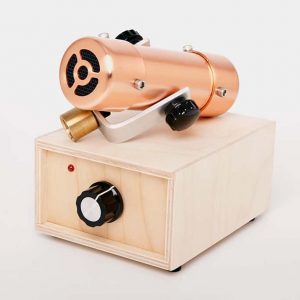 I’d first heard about Carbon microphones in music history class, but it wasn’t until I was recording with a friend when I got to see Placid Audio’s first product, the Copperphone in action. Placid Audio calls it an effect microphone. It’s exactly what it sounds like– a microphone that’s designed to be used as an effect rather than to capture sound as pure as possible. I’ve seen homemade effect microphones before but have never seen them given a name or sold and marketed as one. But I love any opportunity I can get a chance to color outside of the lines, and that’s precisely what Placid Audio microphones allow me to do.

The carbon microphone was officially patented in 1876 by Thomas Edison, but most people credit the invention to either Emile Berliner in the United States or David Edward Hughes in England, who both happened to invent it around the same time independently. The advantage of carbon microphones over other microphone designs is their high output, low impedance, and affordability. The biggest drawback in standard applications is the very limited frequency response. Carbon microphones eventually became less popular as dynamic, and condenser microphones were invented and became more affordable but now, they’re back! This time they are being used as an effect rather than a catch all type of microphone.

The microphones are made up of carbon granules between two metal plates. One of the plates acts as a diaphragm– when the sound waves hit the metal plates the granules change, which alters the electrical resistance between the plates.

Mark Pirro, a musician, and engineer who resides in Dallas, Texas, started building modern carbon microphones 14 years ago. In an interview with Sound on Sound, he explains that the company began when he was searching for a way to get a genuine am old timey radio effect easily in a live setting for his band Polyphonic Spree. After successfully developing the prototype he received a lot of attention and decided to start selling them.

Sure, one could argue you can achieve a similar sound with processing. But I assure you, you’ll never be able to get this sound as quickly and with as much style and vibe as you can with using the actual thing. The real winner here is the Tone Box that comes included with the microphone. It basically turns one carbon microphone into five different sounding microphones. You can even play around with using the tone box on other microphones.

In my post “Setting yourself apart: recording unique sounds” I talk about how important it is to use real effects and to make your own new original sounds. The Carbonphone and the rest of Placid Audio’s line of character microphones will do just that, allow you to add a new color to your sonic palate. I love it on piano or vocals in tandem with a u87. When it comes time to mix I blend the Carbonphone channel to add in some grit and flavor. Over the years I’ve moved more towards mixing in the box, but I still need to stack up the analog flavor on the way in. The Carbonphone allows me to achieve a sound with realness and vibe that you can’t get any other way. You can listen to samples and learn more about the Carbonphone and Tone Box on the Placid Audio website.

Related articles:
Can you tell the difference between real and fake plate reverb?
5 mixing mistakes that I used to make… and how to avoid them
Things I wish I learned sooner about audio engineering
The story of the man behind the RCA 44 and 77 ribbon microphones