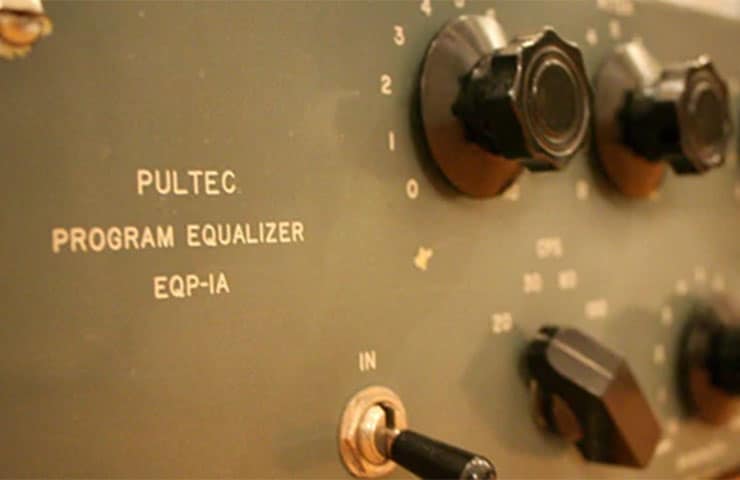 Pultec is the holy grail when it comes to equalizers. But, the reason why Pultec is so great can seem elusive if you asked someone why their answer would be solely their opinion. You could attribute their success to the transformers, the tubes, the Q curves, or being a byproduct of the times, the place, or the people. But really, it was all those things that created the perfect storm for genius. The fact that it’s still one of, if not the most, sought after audio equalizers ever made is an even further testament to that.

Pultecs will always hold a special place in my heart. If I had to list the most important things to me, it would go, my family, Pultec EQP-1A equalizers, and then my girlfriend… Okay… Maybe it’s not that extreme, but I do love the things. I started interning at Sabella Studios in Long Island, New York, in my sophomore year of college. The first time I walked in, I immediately noticed the rack of 9 foreign looking blue boxes taking up the whole wall. I’d never heard of a Pultec, I’d never even seen an equalizer that looked like that, and I certainly didn’t know what made them or the fact that there was a whole wall of them so special. The more I got to use them, the more I grew to love them and started to understand what a privilege it was just to use even one, let alone a wall of 9 of them.

If you took a trip to Teaneck, New Jersey, in 1955, you just might run into Gene Shenk and his longtime friend, Ollie Summerlin, tweaking what would become one of the first Pultec EQP-1 equalizers. Gene and Ollie… they were Pultec. The whole operation was never more than three people, and the majority of the time, they were responsible for everything, including engineering, designing, marketing, and producing each and every piece of gear by hand. These two guys in New Jersey left their mark on the recording industry forever, and not many people even know their names. You can’t go into a recording studio without seeing an original Pultec or a clone of an original, or a plugin emulating one.

Ollie and Gene met studying electronics at the RCA Institute (now the Technical Career Institute College of Technology) in NYC. After school, Gene spent 14 years working for RCA while Ollie enlisted in the Navy. After WW2, Ollie ended up at Capitol Records as an engineer and sold Ampex tape machines before meeting with Shenk to form Pulse Techniques. Pulse Techniques was the formal name for the company that produced the Pultec EQP-1A.

Starting in 1953, the two man team of Ollie and Gene made every single item to order by hand. When people say, “they just don’t make them like they used to…,” they are right. They don’t make them like they used to. You couldn’t make an equalizer today with the same components as an original. Even if you did have an unlimited amount of money, some components are no longer available. Many people claim the transformers on the input and output are the reason for much of the magical powers of the unit. This point is emphasized when you just run audio through the unit in bypass. You can hear the difference even with no EQ engaged.

Listen to these samples — the first is a dry vocal track with no Pultec, and the second is the same vocal track that is being run through a Pultec but with the bypass engaged.

The company first made variable filament supplies for tubes and stepped oscillators. In 1956, the first version of their equalizer, the EQP-1, was seen in the Pultec catalog. They were advertised to the broadcast industry, and the main unique feature and selling point was the tube makeup gain which allowed it to be engaged without the signal dropping in level.

In 1961, the EQP-1 was replaced by the updated EQP-1A, which had added frequency selections. The new 1A model had added a 20 Hz boost and attenuation, a 16 kHz boost, and a 5, 10, and 20 kHz attenuation. In 1981, Shenk was finally ready to retire. He tried, unsuccessfully, to sell the company and eventually ceased production and shut the doors for good.

After closing down in 1981, Gene Shenk received a call from NYC Power Station owner Tony Bongiovi. Bongiovi wanted to place an order so large that Gene couldn’t say no. Eventually, 24 units, mainly the smaller 2U rack version of the 1A, the EQP1A3, were produced for the last ever production run made by Gene Shenk.

Interestingly, the Q curves on a Pultec are so broad that adjusting 30 Hz can affect frequencies up to 1kHz. Also, the manual explicitly states, “do not attempt to boost and attenuate simultaneously on the low frequencies,” yet this is the very thing for which this EQ is famous. Boosting and cutting simultaneously may seem counterproductive, but doing so makes the curve dip before the boost starts, which results in what can only be described as magic.

In the early 2000s, electrical engineer Steve Jackson decided to try and recreate Pultec with some guidance from Gene Shenk himself. Jackson secured the rights to the name and started producing EQP-1A3 again. Many others have tried to copy, clone, and emulate the Pultec EQP-1A. Many will argue that some do it quite well. Still, to most that have had the pleasure of using the original units, there’s an undeniable magic that just can’t seem to be captured in an algorithm or with modern components and manufacturing techniques.

Related articles:
EMT 250 and the birth of digital audio
5 mixing mistakes that I used to make… and how to avoid them
Things I wish I learned sooner about audio engineering
The story of the man behind the RCA 44 and 77 ribbon microphones